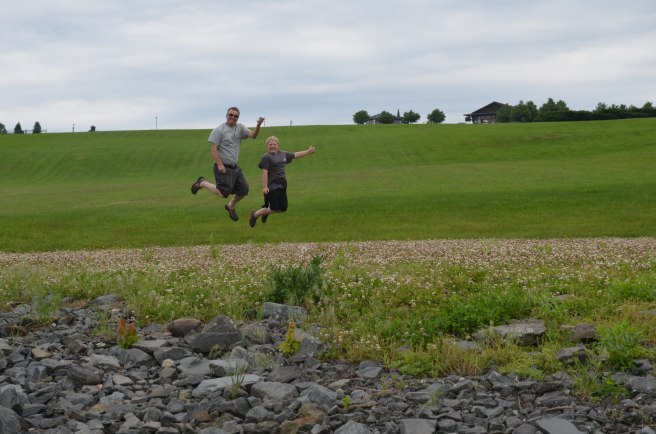 This is a picture of me with my son on the site of the original Woodstock stage where Jimi once famously played the Star Spangled Banner. We were swept up in the moment. What better place for a jumping air guitar salute? “None more better place” is the answer.

Starting a series on icons of rock- I am starting with Jimi Hendrix.

There were guitars that screamed and guitars that jangled. And then came Jimi and the guitar would speak clearly of pain and of joy…..huh?….what?

Jimi and the guitar were one-he slept with his guitar because he was his guitar. When he had nothing as a small boy-he had a broom that he pretended was his guitar and it was his only friend.

Like Tom Hanks in Castaway with Wilson-unnatural bond of person to object.

And I forgot to mention-the best rock guitarist ever to walk the face of the earth. Period. No discussion needed.

Especially for you kids that are new to rock music.

Rock is blues based.

This is a basic timeline.

For purists only-this can sound a little rough as we cannot go back to the 1930’s and imagine how it would feel.  We can’t walk on those dusty roads and hitch a ride to the next town with 12 cents in our pocket.

Robert Johnson arrived and let the world know that something was going on in the delta. The best blues music is always someone going on a rant with their guitar about how things are in their world. You could say that about the best rock music, the best country music or the best hip hop music.

The truth thrown out there in a compelling way.

T-bone Walker added some fire to the guitar- he started doing things that no one else could.

“They call it stormy Monday, but Tuesday is just as bad.”

There are other songs that I should pick to show off the virtuoso in action—-but this is sooooo smooooooth.  It just dances and tickles the music palette before seeping gently into your soul.

Jimi ran all that energy and inspiration in one big liftoff that reached orbit. We got great guitar players now-we don’t have a name that I can place next .

Jack White is close if you make me force a choice. Close still does not fit. Like a giant stone used in the pyramids-it has to ease in there perfectly. I am still waiting.

And here is where we finish for now.

I am going for less fire and more heart in these tunes and want to end with one of the greats in that next group to follow. SVR spent his whole career chasing down Hendrix-he even carried one of the master’s wah wah pedals on this journey. I am not going to throw a link here-but I do write about a show where I was lucky to catch him with his boots on this pedal early in my blogging days.

Maybe lucky is not the right word- Let’s try blessed.